On Thursday 4th February 2021, we lost one of Lincolnshire's best known and most liked Birders. Sadly after a few days home from back surgery in Sheffield, Steve Keightley passed away in the Boston Pilgrim Hospital intensive care unit after contracting COVID 19.

I first met Steve in a chance meeting at Butterwick Marsh in about 1978. I think more than anyone else he was the person who kindled my interest in Birds. He was so helpful showing me my first Grey Plover. He was chatty and enthusiastic and eager to help, giving advice on places to go and what I could see.

I would have never thought that he would become one of my greatest friends and we would do so much together over the last 40 years. In the early years a group of us would meet up at the Kings Arms on Horncastle Road in Boston on a Thursday and Sunday and I would listen to stories of going miles to see rare birds, I thought they were all mad but with Steve’s help I was soon doing the same. In 1983 I started my own business which was rewarding but very stressful and Birding with Steve was my way of relaxing.

Steve’s main birding spot was Cut End which he counted for WeBs for 40 years and over the years I estimate that we did over quarter of a million miles Twitching all over the UK.

Along with my wife, Kay and Steve’s wife, Sally, we did Majorca a couple of times, taking slides ready for the LWT and Bird Club members evenings. Along with Barry Hancock and Alan Ball we did the bird race with a new county record two years in a row (1986/87).

Steve was the driving force behind the building of the Cut End Hide and I am pleased to say my company helped with a donation. 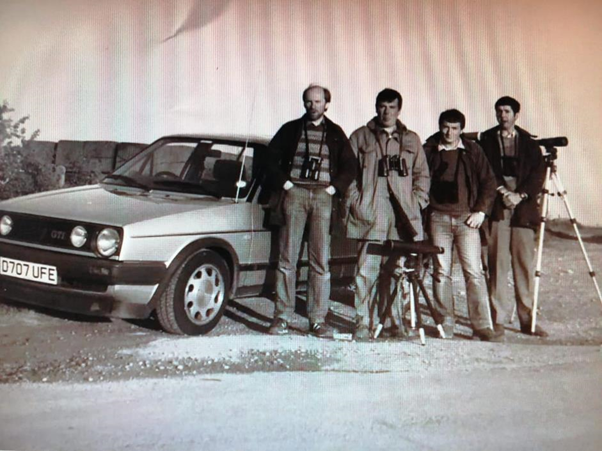 Reminiscing with Alan Ball he told me he first met Steve in 1971, In those days Alan used to do a lot of fishing, and his regular spot was on the Bargate Drain near to Steve’s parents’ house. They went to different schools so only knew each other through birding, either at Frampton, Freiston and via Alec Parker who was training to ring under John Marshall at Friskney Decoy Wood.

Alan would later take Steve on as a trainee ringer himself.

Alan can recall meeting Steve one day in 1981 at the Witham Mouth, when Steve invited him to ring a Shag he had rescued before its release.  Alan went back to Steve’s parents house on Willoughby Road and they went to the shed. When Steve opened the door, the Shag shot out, and Alan’s immediate thought was  “well that’s gone – never to be seen again!”, but the Shag just ran round and round both of them on the lawn begging for sprats. It recovered and was successfully released. Alan has many fond memories of Steve, such as the time in autumn 1984, when he came back from a net round at Seacroft with a big grin from ear to ear.  When he asked him what he had, Steve wouldn’t answer and simply swung his head from side to side…..trying to emulate the Wryneck that was in the bag!  The next time Steve went to Seacroft he came back from a net round with a Red-breasted Flycatcher.

It was Steve that found the Lapland Buntings at Butterwick just before Christmas in 1985, they caught the first three on Christmas Eve, and Steve caught three more on Boxing Day.  Prior to then only 95 had ever been ringed in the UK.  Between us we went on to ring 290 over the next four winters getting two retraps in successive winters and one two winters later.  I can remember taking them down to Butterwick through deep snow drifts in my 4x4 to put food out as Steve wanted to make sure they had something to feed on in the severe weather. Some of the drifts were several feet deep and it was quite a journey. 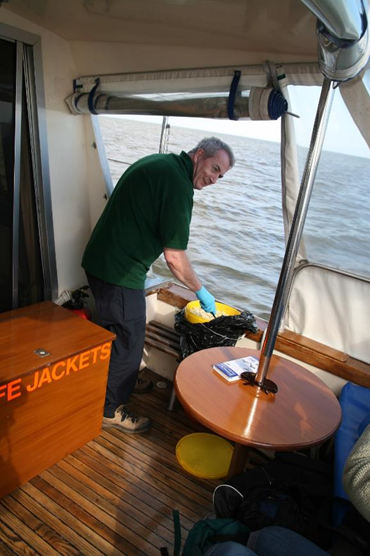 In 1988 Steve (then working for NKDC as a Housing Maintenance Officer) realised that an ongoing re-roofing contract was going to prevent Swifts nesting along New Street in Helpringham and Steve somehow had the work stopped. This was one of the largest Swift colonies in Lincolnshire. Later when insulation was going to be fitted in the remaining houses, he designed a modification to continue to allow Swifts to nest, and also liaised with a construction rep from Marley to design a new Swift roof tile.   Between 1988 and 2012 he and Alan ringed over 1,500 Swifts, of which nearly 1400 were chicks.  They subsequently had several (8 no.) retraps of Swifts ringed as chicks returning to the street to breed in subsequent years (I think they were not really known to return to their natal area prior to this), including a few that had returned to the very same house that they were raised in.  Steve and Alan subsequently went to a meeting at Chris Mead’s house with a few others interested in Swift conservation and the ‘Concern for Swifts’ group was formed.

Steve started out as a humble carpenter, then after his time at North Kesteven Council, he moved over to the NHS becoming Estates Manager at Pilgrim Hospital where he was often on call all night so the late Alec Parker and I Twitched everything for a few years and Steve would come along when he could.

I have so many stories I could tell you but a few come to mind.

Steve, Alec Parker, Alan Ball and I, hired a fishing boat to take us to Lundy for the Ancient Murrelet and the trip saw us all standing in a 1 meter square box made from pallets, getting soaked all the way there, stopping overnight on Lundy and getting up at Sparrow fart to get to Jenny's Cove before the sun came up. Watching the bird until it disappeared in the rocks and then walking back to the boat and watching the crowd who had just arrived running to see it, but they had no chance.

In 1987 Steve was off work, in bed rather poorly when news of the Yellow-billed Cuckoo at Rauceby Warren broke and I went to his house and managed to get him in my car and across to see it making sure he hid below the seats when we went past the council offices where he worked. On arrival he looked very pale and obviously felt terrible but he saw the bird and i can’t help feeling he was even more happy to go home to go back to bed.
Then in 1988, he returned the favour. I was at a family birthday party and considerably drunk, when at 11:30pm Steve called with news, “Least Sandpiper at Upton Warren, pick you up at 2:00am”. We must have stopped 20 times for me to be sick and when we arrived Steve held me up to his scope and made sure I saw it so I could get a new tick.

Steve was county recorder from 1996 until 2009 and was responsible for the computerisation of the county records using Wildlife Recorder which we still use today and became a very accomplished photographer using Nikon gear doing slideshows all over the place.

In 2014 when my wife Kay died, Steve and Sally took it on themselves to make sure I was OK, feeding me, looking after me like an old Uncle, we then started birding more often with fantastic trips to Costa Rica (twice), Panama, The Gambia, Lesvos (3 times), Switzerland (twice), Finland, the Russian border to film Brown Bears, along with trips to Belgium to watch F1 at Spa and Birding afterwards in Belgium and the Netherlands.

We had loads more planned but it was not to be, in 2018 I was diagnosed with Myeloma (Blood Cancer) and Steve and Sally did everything they could to help me. Then in 2019 we were all surprised when Steve was found to have a 2kg cancer tumor on his adrenal gland. We both had treatment and were getting over it when COVID struck and 48 weeks of lockdown stopped a lot of our birding ideas.

Steve was without doubt one of the nicest guys you could ever meet, he was full of knowledge, would help anyone, a great friend to me and so many others. His passion in life was without doubt birds and I am proud to have known him, he will be sadly missed. RIP mate. 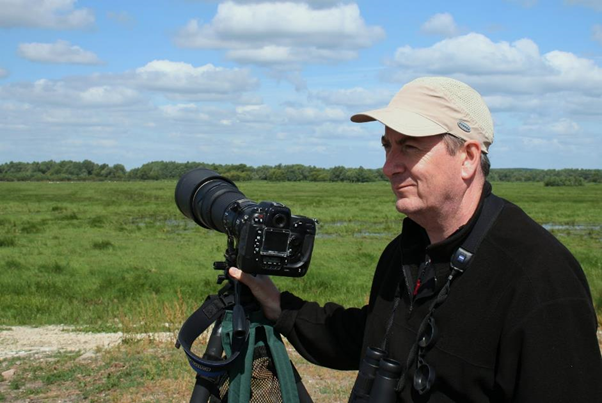 Steve Keightley as many of us will remember him, in the field © Neil Smith