Gibraltar Point is about 3 miles south of Skegness, follow the brown tourist signs.
The nearest bus and train stations are in Skegness. It is possible to arrange a bus to Gibraltar Point using Call Connect Service.

A downloadable map can be found at http://www.lincstrust.org.uk/sites/default/files/gib_map.pdf

One of the counties best known site is Gibraltar Point which impresses by its sheer scale and diversity of wildlife but to appreciate it fully you need to see it in different seasons.

For details on species see http://www.lincstrust.org.uk/nature-reserves/gibraltar-point-national-nature-reserve/habitats-and-species

In spring, when the first of the migrants stop off to refuel or establish territories. In summer, little terns may be seen fishing in the shallows and skylarks are in full song above the purple haze of the saltmarshes. In autumn, huge whirling flocks of waders can be seen on the high tides. And in winter, there brent geese, shorelark and snow bunting as well as flocks of redwing and fieldfare.

Bird migration and population has been studied at the Gibraltar Point Bird Observatory since 1949.

Concern about the decline of some of our best known summer migrant birds like turtle dove, spotted flycatcher and cuckoo has highlighted the work of Britain's seventeen bird observatories.

The Lincolnshire Wildlife Trust's Observatory at Gibraltar Point, opened in April 1949, was one of the earliest. Years of observation, ringing and examination of birds has provided a wealth of information about their location and movements throughout the seasons, their physical condition and changes in their populations, all information essential for framing and implementing measures for conservation.

Hundreds of thousands of birds of many species fly through or over or make landfall at Gibraltar Point during the course of a year. There are in fact few periods when there are no bird movements or migrations to be expected.

The work of the observatory is carried out voluntarily by local and visiting ornithologists. A dedicated local team is responsible for day-to-day management with the oversight of the Reserve Manager. The observatory fulfils a valuable training role in bird ringing, residential training courses have been held almost annually for several decades.

A downloadable map can be found at http://www.lincstrust.org.uk/sites/default/files/gib_map.pdf

The spectacular new Gibraltar Point Visitor Centre has been designed to make the most of the nature reserve's stunning views, with expansive windows facing the dunes and sea plus a rooftop viewing deck! The new cafe offers a range of exciting and delicious dishes. See http://www.lincstrust.org.uk/node/6744 for details. 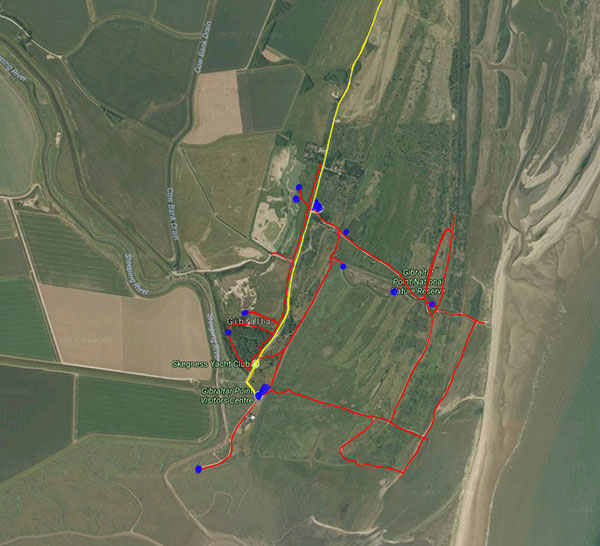 We are always keen to keep the birding site pages as up to date as possible, please send new information, additional photographs and comments to info @ lincsbirdclub.co.uk - Thanks!
Information by: Andrew P. Chick