RSPB Frampton Marsh is close to main routes. Access is from the A16, follow the brown sign and carry-on for 3 miles until you get to the reserve entrance. For more information please visit the website here http://ww2.rspb.org.uk/reserves-and-events/find-a-reserve/reserves-a-z/reserves-by-name/f/framptonmarsh/index.aspx

The reserve, car park, footpaths and hides are open at all times.

From November to February, the visitor centre and toilets are open from 9.30 am to 4 pm daily (except for Christmas Day).

From March to October the visitor centre and toilets are open from 9.30 am to 4 pm weekdays, and 9.30 am to 5 pm at weekend.

A major new extension to this coastal wetland reserve includes a reedbed, large freshwater scrapes and wet grassland. These habitats have all been created to bring the wildlife of the Wash closer to you.

New facilities include a visitor centre with toilets; the centre has a refreshments area where you can get a hot or cold drink and a snack. We also have three hides - two with 360-degree views - and over 3 km of new footpaths to explore.

Frampton Marsh is at the leading edge of visitor and habitat nature conservation planning. We have designed every aspect of the new habitats and facilities to maximise the value for wildlife and the opportunities for visitors. Ideally positioned between Norfolk and the Midlands, a visit will be well rewarded.

What can you expect to see?

During the winter months the site is alive with birds, no less than 10,000 birds can be seen! Thousands of Wigeon spend the winter here along with other wildfowl; Brent Geese, Teal, Shoveler and Pintail. Large flocks of Golden Plover and Lapwing can also be seen around the reserve. Ruff regularly winter on the site, up to 100 can be seen.

With these numbers of birds it’s bound to attract plenty of birds of prey and it does! Peregrines can be seen daily hunting, creating a real winter spectacle as all the birds on the site fly up together and create a whirlwind of noise. Hen Harrier, Marsh Harrier, Merlin and Short-eared Owls hunt the large expanse of saltmarsh. Seeing 7 birds of prey in a day is relatively easy to achieve in winter. And not forgetting our roosting birds, the reedbed holds a regular roost of Starlings. Whilst watching the Starling murmuration you’ll also get to watch the Whooper Swans come into roost as they come in across the fields and spend the night on the open water of the reedbed. 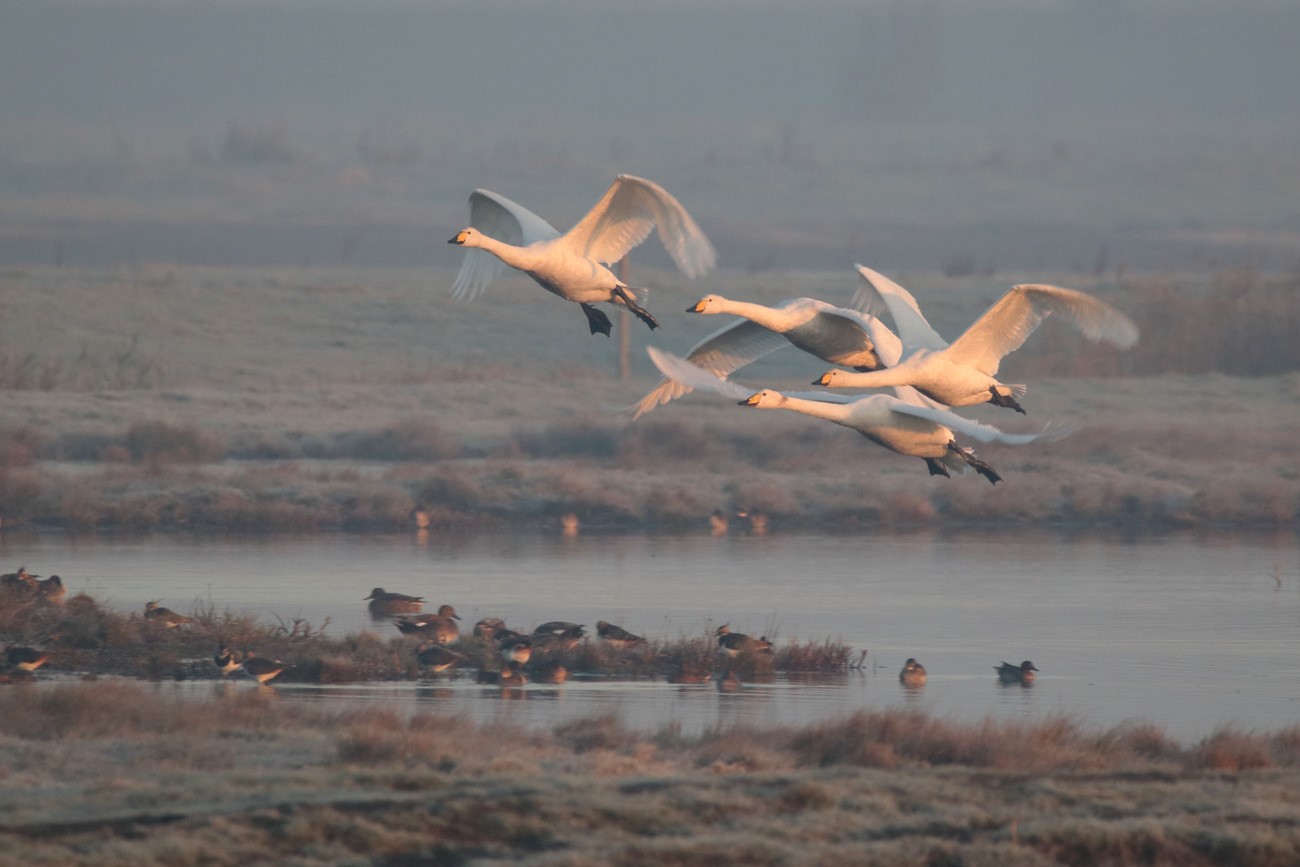 You can expect to see most of our winter visitors well into spring, in fact the Brent geese often stay well into May. The Jingling keys of Corn Bunting song can be heard in May and June around the back of the reedbed, other birds are singing too. Sedge and Reed Warbler can be heard around the site, whilst Blackcaps, Chiffchaff, Cetti’s Warbler, Lesser Whitethroat and Whitethroat return to our hedgerows. Joined by the declining Turtle Dove, RSPB Frampton Marsh is sadly one of only a few reliable sites in Lincolnshire where you can see Turtle Dove’s, the best place to look is from the reservoir looking back along the hedgerow in the dead trees, they return in the last week of April. Spring also brings fine Yellow Wagtails, they love to feed around the cattle on site, keep an eye out for rarer European forms such as Blue-headed Wagtail.

In April Whimbrel are coming through the site a good place to see them is often in the field around the reservoir. Other passage waders are moving north to their breeding grounds and thousands will stop off at the site to refuel. Dunlin and Ringed plover, Black-tailed Godwits can be seen in there thousands. Scarcer waders such as; Temminck’s Stint, Little Stint, Spotted Redshank and Curlew Sandpiper can also be seen. Rarer waders are regular as well, Black-winged Stilts seem to be annual visitor generally in May. Ruff often stay well into may and even June, although they don’t breed on the site, they can be seen lekking regularly on site, well worth a visit just to see the stunning male Ruff in the fine plumage! Black Terns and Little Gulls can often be seen around the site in May 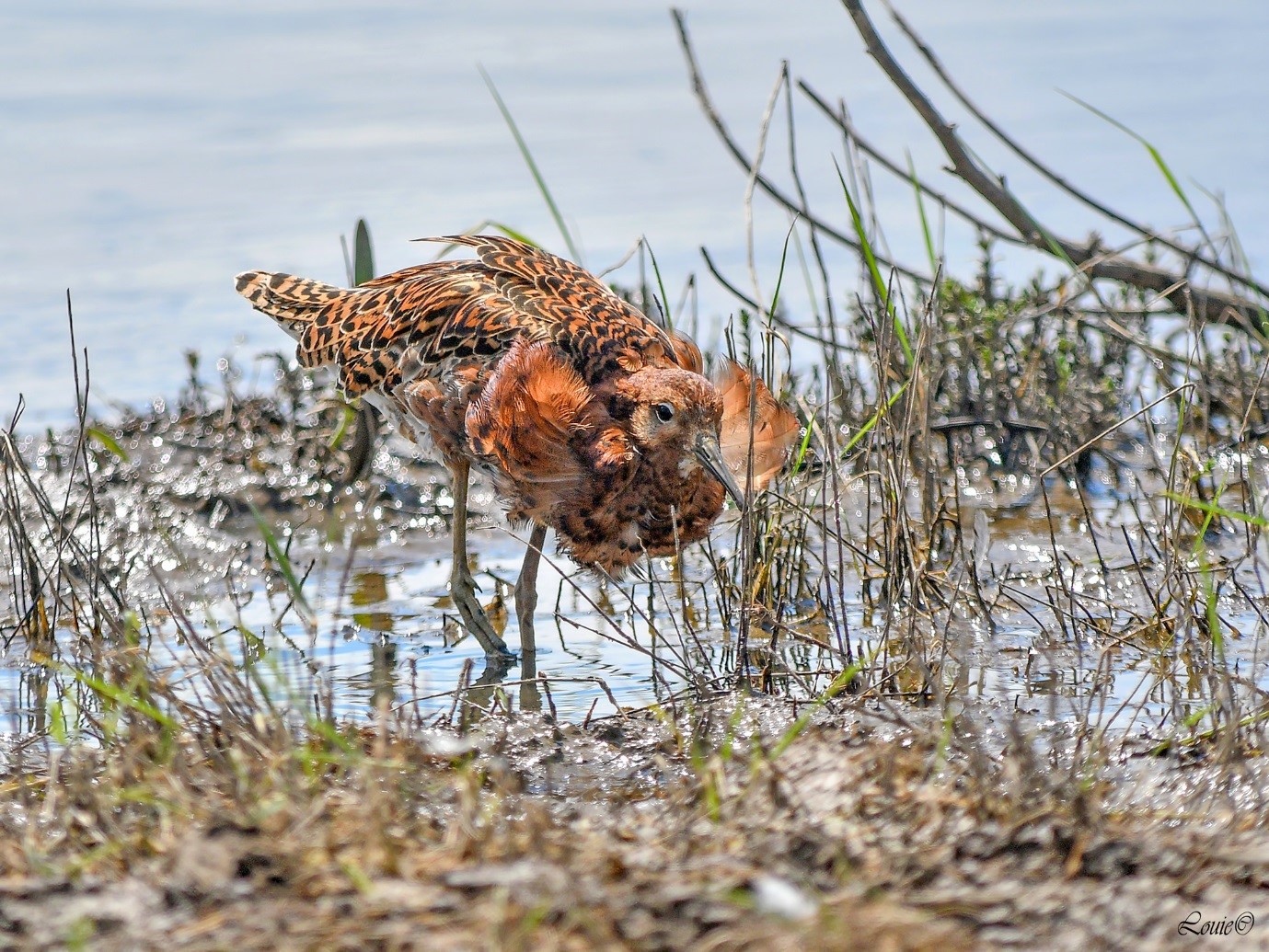 During the summer months breeding is in full swing. Avocet, Little Ringed Plover and Common Tern all breed on the scrapes, close views can be obtained from either the 360 or East hide. Whilst the Reedbed Hide overlooks a colony of Black-headed Gulls, Mediterranean Gulls can often be seen within the colony too. The reedbed also hosts nesting Great Crested Grebes which can be seen dancing on the water. 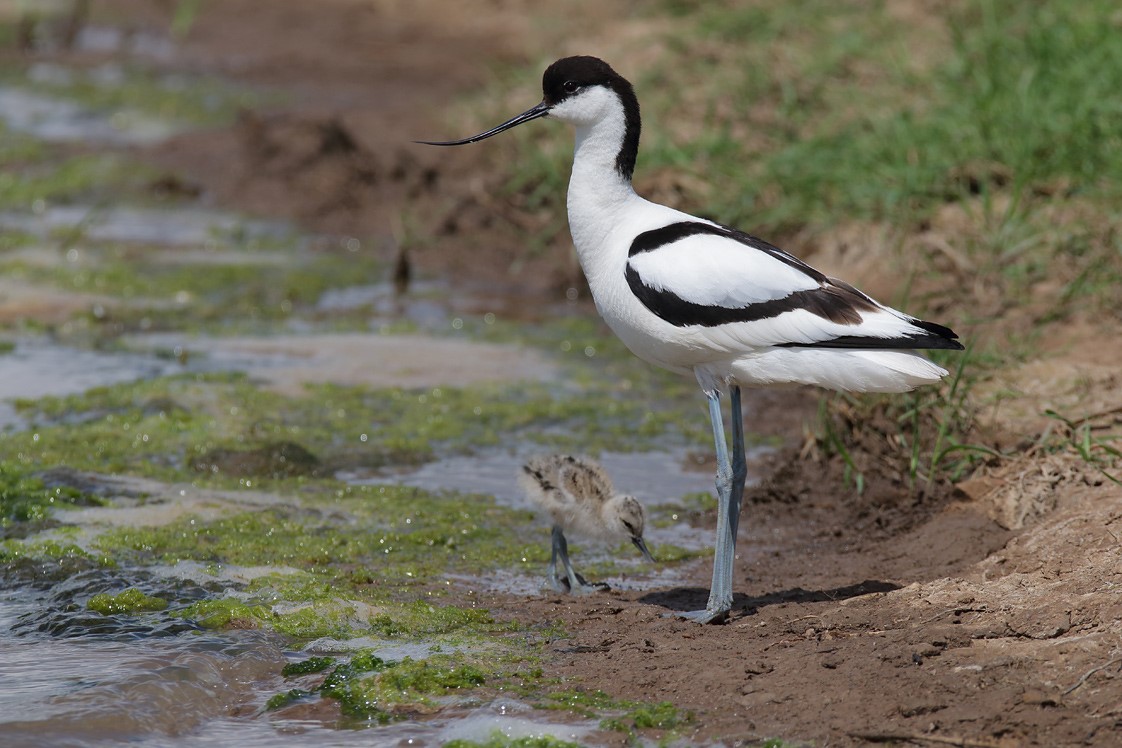 Late Summer and wader are already returning from the breeding grounds, thousands of Dunlin, Ringed Plover and Black-tailed Godwit can be seen. High tide is the best time visit as the tide pushes the feeding waders off the mudflats of the Wash. Little Stint and Curlew Sandpiper return to the site with peak counts of 52 and 241! Rarities such as; Oriental Pratincole, Greater Yellowlegs, Collard Pratincole, Lesser Yellowlegs, Baird’s Sandpiper, Broad-billed Sandpiper, White-rumped Sandpiper, Pectoral Sandpiper have all been seen in the summer months. 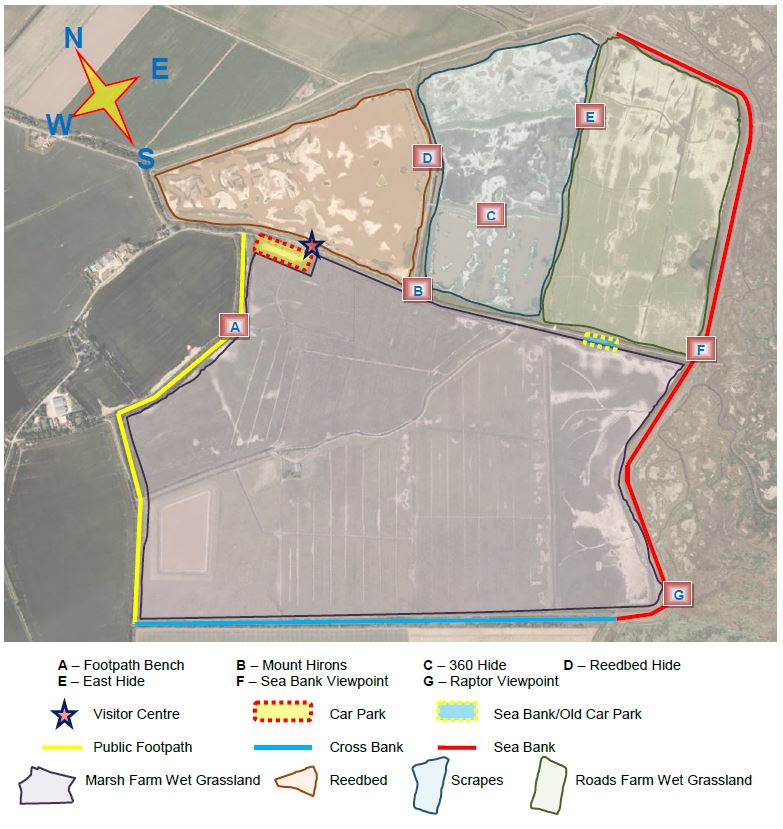 We are always keen to keep the birding site pages as up to date as possible, please send new information, additional photographs and comments to info @ lincsbirdclub.co.uk - Thanks!
Information by: Antony Bentley