The joint LBC/LNU meeting is booked for 11th January 2020 when Barrie Wilkinson will be talking about Gibraltar Point. Barrie launched his new illustrated book ‘The Story of Gibraltar Point’ in 2019 which is the culmination of decades of work and research. The book charts the history of Gibraltar Point from the mid-1700s to present day. He first began researching the site back in 1968 and still is a regular visitor to this day. The meeting will be a the Whisby NR Education Centre starting at 2pm.

This pioneering partnership saved Gibraltar Point from the threat of development. Today it is well known for its impressive views and sheer scale and diversity of wildlife, and is recognised as an internationally important nature reserve.

Now, its history is told in a new book: The Story of Gibraltar Point by Barrie Wilkinson.

Barrie Wilkinson, former Trust Reserves Manager and long serving volunteer, first became involved with Gibraltar Point in 1952 at the age of 15. Barrie tells the story of Gibraltar Point through his researches, the recollections of those who have known and loved the place, and his own experiences of a lifetime’s involvement in the wildlife and with those involved with the use and management of the site.

The sand hills to the south of Skegness had long been recognised as an area that was important for wildlife and were included in a national list of sites ‘worthy of preservation’ as early as 1912. But it wasn’t until the 1930s that action was taken to protect Gibraltar Point from development. A speedway track and a seaside resort were amongst the proposals. Luckily, Lincolnshire County Council saw the threats and acted. The Sandhills Act of 1932 enabled the Council to control development of Lincolnshire’s coastal sand hills and acquire them if necessary. In 1937, they bought most of Gibraltar Point to safeguard it against development. 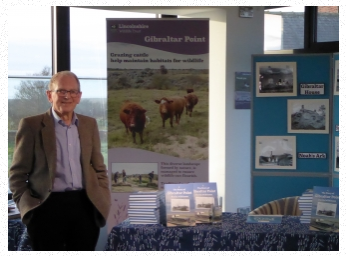